Chicken pox or adult chicken pox is an illness that affects the skin and is caused by the varicella zoster virus. This type of virus belongs to the herpes family of viruses.

Most people acquire chickenpox when they are children, but this skin problem can also occur during adulthood. chicken pox is more likely in tropical countries.

Over 90 per cent of people worldwide will become infected with the chicken pox virus during their lifetime, unless they are vaccinated against it. The virus is more likely to strike individuals during the winter season and up to early spring, but it can infect individuals during any time year.

Chicken Pox not a Serious Condition in Healthy Individuals 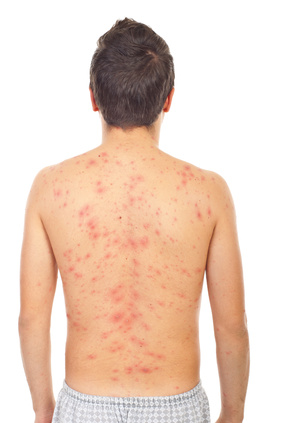 In healthy people, chicken pox is not considered a serious illness or serious skin problem. However, like any virus the severity of the illness caused by the virus varies from person to person. Complications can occur when newborns are affected by this skin problem, but most complications occur with adult chicken pox. In particular, pregnant women and people over the aged of 15 years old may experience complications.

In addition, chicken pox can be a serious illness for people who have a weakened immune system due to health problems such as leukemia, HIV or AIDS. Chicken pox is also a serious health concern for individuals that are on medications as a result of an organ transplant, are taking steroidal medications, or individuals undergoing immunosuppression therapy. Pneumonia, encephalitis or brain swelling, or significant infections are the likely complications from chicken pox.

Chicken pox is a very contagious skin problem. It is spread by:

The chicken pox virus is usually spread before any chicken pox symptoms are noticeable. In fact, chickenpox are usually most contagious for two to three days prior to the rash or blisters developing on the skin. An infected person remains contagious until the broken blisters form scabs. The scabs are not contagious because they do not ooze virus containing fluid.

Once a person has suffered with chicken pox, it is not likely that the virus will strike a second time. This is why adult chickenpox is not as common as childhood chicken pox. Should the virus attack a second time, the symptoms are generally very mild. The body builds immunity towards the chicken pox virus after the first bout with the virus. The virus remains in the body, but it is inactive.

Occassionally, the chickenpox virus becomes active again. This usually occurs in adulthood. When the virus activates a painful skin rash develops. This rash is known as shingles or adult chicken pox and strikes 20 per cent of adults. Shingles are not contagious, but it is possible to infect individuals with chicken pox that have not had chicken pox before.

More information can be found at the following pages: