A proper frostbite treatment is required in order to ensure that the skin recovers properly and so that no serious health complications occur. But first it is important to recognized the symptoms of frostbite.

There are a number of frostbite symptoms that individuals should be aware of when they have been out in freezing temperatures and when they come indoors after exposures to cold temperatures.

In general, the signs of frostbite can be divided into two main classes of symptoms. These two types of frost bite symptoms are labeled as superficial or deep. For superficial frostbite, the skin will have a tingling sensation, may feel as if it is burning, will have various degrees of numbness, will feel cold, may itch, and have a white and possibly frozen appearance.

The more severe frostbite is classified simply as deep frostbite. The symptoms in this case are complete loss of feeling in the affected skin parts, swelling of the skin, appearance of blisters that are blood filled, yellow or white looking skin that has a waxy look to it, and the skin is very hard to the touch. The skin eventually appears as if it is bruised and possibly black. 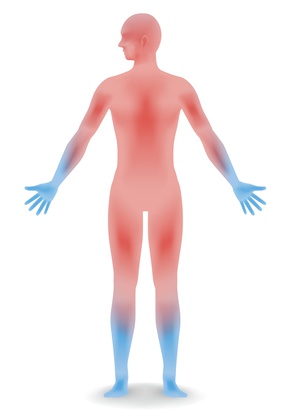 With rewarming of the skin, pain is experienced. The amount of pain can coincide with the amount of damage or severity of the frostbite. The pain may persist for weeks. The amount of tissue damage sometimes is only revealed after several days or weeks after the exposure.

Often the frostnip symptoms are classified in terms of more detailed stages or degrees as is the case for heat or chemical burns. There is no consistency in how these stages are defined or how many separate stages or degrees there are. Below are some examples.

At stage one the skin is white or yellow in appearance with a slight burning sensation usually being experienced by the frostbite sufferer. This is considered mild frostbite and reversible with no permanent skin or other tissue damage. The signs of frostbite at stage two include reddening and swelling of the skin and numbness. Blisters likely appear a short while after the exposure has occurred. The third stage or degree means hard waxy skin, tissue death, and irreversible damage.

The signs of frostbite classified as first degree include lack of sensation of the skin to any stimulus, waxy skin appearance, and a hard feeling to the skin instead of the normal soft and supple feel. The second degree frostbite symptom is the formation of blisters either with milky or clear fluid inside. These blisters normally appear about one day after the overexposure to the freezing temperatures. If the blisters are blood filled, then many consider this third degree frostbite. Finally, if the frostbite has penetrated deep into the skin structure thereby affecting nerves, muscle, and bone, then this is considered the fourth degree of frost bite. Tissue death and tissue loss accompanies this fourth degree or stage.

If the frostbite is severe, get the victim to the hospital immediately. If the frostbite is minor, then a treatment for frostbite can be employed. A rewarming process is the basis for treating frostbite. This can be accomplished by wrapping the affected skin area in blankets or by immersing the affected skin in warm water for 15 to 30 minutes. The water temperature should be about 100 to 107 degrees Fahrenheit. Warm cloths may be used instead of water immersion. Sensation and proper color should start to return to the skin within the specified time period. If not, then consult with a physician and especially if you have any doubts or concerns. There will be a certain amount of pain and burning sensation of the skin, the skin may blister and it may discolor depending on the severity of the frostbite, as the rewarming process occurs. After treatment, it is recommended to apply sterile dressings to the affected area if blisters are present to prevent infection.

There are certain things you should not do when treating frostbite. The first thing is not to delay getting medical attention if severe frost bite is suspected. This is also important because frostbite victims often may have hypothermia as well and thus medical attention becomes doubly important. Avoid the following frostbite treatment procedures that individuals sometimes mistakenly employ as they may lead to considerable skin tissue damage: the use of direct heat for skin warming from heating pads, hair dryers, fire, hot water, etc.; if the skin is at risk at being refrozen then do not thaw the skin until medical attention can be given; do not rub skin that is suspected of being frostbitten; do not rub snow or ice on the frostbitten skin; avoid popping blisters that may have formed on the skin; and avoid disturbing the frostbitten skin as much as possible.

Note that even though a frostbite treatment is given, permanent damage may still occur. This can be the case when the frostbite was severe and deep into the skin tissue, thereby affecting the nerves, blood vessels, muscle, and bone. Gangrene may occur, leading to loss of skin tissue and in the worst case scenario amputation. Therefore, frostbite is not something that should be taken lightly and it is good to be aware of a proper treatment for frostbite.

frostbite and causes | symptoms and treatment | pictures and prevention