However, some experts believe that as long as the skin care products are good quality, then they are suitable for either gender. This may be true for some types of skin care products, but keep in mind that there are real differences in skin properties between the two genders. Therefore, it is logical that men and women should use different skin care products in certain situations. 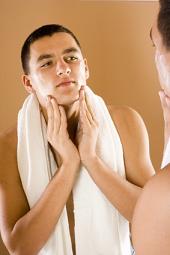 There are six key differences in skin properties between a man and a woman. Of course, not all of these differences are necessarily applicable to all individuals. Each person’s skin has its own properties that are determined by a number of factors such as heredity. However, in general, a man’s skin does show differences when compared to women’s skin.

The skin of a man has smaller sebaceous or oil glands. This is opposite to what most people believe to be true. Absorption of active ingredients in skin care products is primarily through these glands, and therefore this is a consideration in the formulation of products for proper mens skin care.

Despite the fact that the skin of a man has smaller oil glands, it is generally more oily than a womans. This is due to the male hormone testosterone, which is responsible for the skin generating a higher amount of oil secretions. The female hormone estrogen results in the skin of women secreting less oil. After the age of 50, the oil secretions in the skin of men tend to slow down making men's skin closer to women’s skin in the degree of oiliness.

Higher oil production in the skin means that the skin of a man is more susceptible to acne related problems and other blemishes. Therefore, skin care products for men need to take this into account in order to function as required.

A man's skin is thicker than that of a woman. This means that women are more vulnerable to damage of the skin caused by the sun’s UVA rays and is one of the principle reasons why female skin suffers more from sun aging.

The skin on a man’s face is more delicate than for a woman. You wouldn’t think that this is the case. However, there are some reasons why this is true:

All of these factors result in mens skin becoming more sensitized than women's skin and more easily irritated.

As skin ages, its properties change. A mans skin gradually becomes thinner with age (about 1% per year). A woman's skin is more likely to change color and texture with age because it is more sensitive to sun damage and because of the fall-off of estrogen production after menopause. Estrogen maintains the bony framework beneath the skin, keeps it soft, resilient and healthy. Prior to menopause, women’s skin thickness remains fairly constant.

The amount of collagen in the skin decreases to a greater extent in women than in men as individuals get older. This is also a main reason why women, who have similar historical sun exposure to men, appear older than men of the same age.

Skin cancer in men and women differs in a number of ways:

Finally, there has been some research indicating that a mans skin has less nerve fibers (about 50% less) that women's skin. This can potentially explain why it is suspected that females have a greater sensitivity to skin pain.