Knowing the right mosquito bite treatment is useful for alleviating the symptoms of a mosquito bite and to minimize the effects on the skin.

Mosquitoes are insects that are found all over the world and numerous species exist. It is the female mosquito that does the biting. The female requires blood from its victim in order to be able to lay eggs and thus produce more mosquitoes.

When a mosquito bites, it injects saliva into the skin and this saliva acts as a local anesthetic so that the victim does not feel the attack. The saliva also acts as an anti-coagulant so that the mosquito can easily suck the blood from its host.

After the bite occurs, humans require some sort of mosquito bite treatment in order to ease the symptoms that occur. A mosquito bite usually results in redness and minor local swelling around the mosquito bite site. Itching is also very common and tends to last longer than the swelling, which subsides after a few hours. The itching is caused by a skin reaction to the mosquito’s saliva. These symptoms usually occur soon after the mosquito bite has occurred. 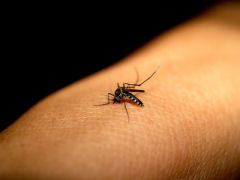 After many bites, some people become rather insensitive to them and their skin barely reacts. However, for others the mosquito bite symptoms become more severe with more bites. In fact, some people are considered allergic to mosquito bites and these individuals would definitely benefit from a mosquito bite treatment.

Unlike allergic reactions to bee stings or wasp stings, where an allergic response can cause immediate death, this same response from a mosquito bite is very very rare. Instead, symptoms of an allergic response to a mosquito bite involve more significant swelling of the skin with sometimes very large hives or welts forming, more redness at the bite site, and extreme itching. These symptoms tend to last much longer than in non-allergic individuals, sometimes lasting two or three days. In more severe cases, blistering and bruising may also be the response. Overall, it is a much more uncomfortable and painful situation for the victim and a bite treatment becomes important.

In addition to the previously mentioned symptoms, various diseases can be spread by mosquito bites. The exchange of mosquito saliva and blood provides a perfect situation for the spread of disease. The diseases spread by mosquitoes include Malaria, Encephalitis, West Nile virus, Yellow fever, and Dengue fever.

The prevalence of these diseases depends on the geographic location. Certain areas of the world carry a greater risk of contracting these diseases than others. Therefore, when travelling (especially in tropical areas), visit a travel clinic before departing. This will allow you to determine what threats exist from mosquito bites and other insects and possibly make a treatment for a mosquito bite unnecessary.

If unusual symptoms develop about five days after being bitten by a mosquito, then a standard mosquito bite treatment is ineffective and a visit to a physician should be a priority. Unusual symptoms can include severe headaches, fever, skin rashes, nausea and vomiting, disorientation, chills, and muscle pains.

Mosquito bites are annoying for individuals, but often no mosquito bite treatment is used. However, because of the possibility of contracting one of the above mentioned diseases, it is very important to avoid getting bitten as much as possible. Prevention is the best treatment.

Reduce the Risk of Being Bitten

In order to reduce the risk of being bitten:

Following these steps will go a long way to preventing bites and the subsequent need for a treatment.

In order to get relief from the mosquito bite symptoms, a treatment for mosquito bites is required. A treatment for mosquito bites involves washing the affected areas with soap and water to ensure no infections develop and to help reduce the itch. Applying soap directly to the bite has been suggested as an itch remover. Use a cold compress on the bite site to help alleviate the itch, swelling, and redness. A bite treatment may also involve some of the procedures listed below.

Not scratching the mosquito bite area is an effective treatment for a mosquito bite. Scratching prolongs the swelling, itch, and discomfort, and can open the skin and cause an infection. If your mosquito bite becomes red and swollen and if the area around the bite feels warm to the touch, the bite may be infected. If this condition persists and does not respond to a standard mosquito bite treatment, then consult a physician.