In many cases, a trip to the beach means a sand flea bite or several bites. What are sand fleas and should I be concerned if I get bitten?

What is a Sand Flea?

A sand flea is also known by many other names. For example, this crustacean (although it resembles an insect, the sand flea is actually not one) is also called a sand fly, beach flea, hop-a-long, no-see-um, biting midge, and punkie or punky.

The sand flea is less than 1/8 of an inch (3 mm) long and is often difficult to see.

It is a shrimp-like creature in appearance and ranges in color from pale to brownish. The body has seven segments and it has long legs that are used for swimming or jumping. They are known to jump to a height of at least 40 cm and therefore, it is unusual to experience a sand flea bite on upper body parts unless the victim was lying down. The bites are normally found in clusters around the ankles. 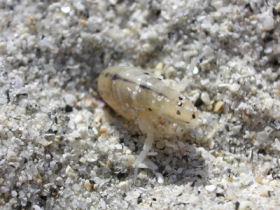 Sand fleas feed on organic and decaying plants. A favorite treat is seaweed on the beach. Whenever seaweed washes to shore, there will be a large number of sand fleas around and a sand fly bite is likely to occur. In general, the sand on the beach is a popular location for these fleas to live.

A bite from a sand flea is most likely to occur at dawn or in the evening and night time hours on the beach or other sandy areas that are near water. Wetlands, swamplands, creeks, and lakebeds are other areas where sand fleas can be found. Sand fleas generally stay close to their breeding ground. They never wander more than 350 feet or about 100 meters from their breeding area. Sand flea swarms produce a high-pitched wine. Therefore, if you are on the beach and you hear something like this, it is best to move or risk a sand flea bite.

The fleas will jump onto the feet, ankles, legs, and then bite. They are very persistent and quite annoying. Because of their small size, a sand flea bite occurs before individuals even know any sand fleas were in the area. Like a mosquito, a sand flea bites to suck blood. It is the female sand fly that bites. It does this in order to get the protein from the blood that is necessary for its egg laying. The bite of a sand flea involves the injection of saliva to thin the blood, making it easier for the flea to take blood from its victim. This same saliva triggers the body’s immune system to react.

Despite its size, the bite from a sand flea is quite painful. In fact, most of the time the bite is more painful than one from a typically larger mosquito. In addition to pain, the bite causes a large welt or rashes on the skin that can persist for several days. A fever may also occur. The welts or hives produced from bites are very itchy. Scratching the bitten areas should be avoided in order to prevent the development of an infection. Scratching will also prolong the symptoms of swelling, itch, and skin redness.

Sand flea bites are also known to carry various diseases such as Carrions disease, the Pappataci fever virus, and various parasites that can cause conditions such as Leishmaniasis.

Leishmaniasis is not as widely known as malaria, but is just as painful and dangerous. Because the sand flea feeds on human blood, there is the possibility of transferring protozoan parasites that are responsible for this disease to humans.

Leishmaniasis is more likely to be encountered in the Mediterranean, North Africa, The Middle East, South East Asia, Central America, and the Caribbean.

There are various forms of the disease:

Other problems, which may become present anywhere from a few months to years after the bites occurred include fever, damage to the spleen and liver, and anemia.

Treatment procedures and prevention steps for a sand fly bite are similar to those of mosquitoes. If more severe reactions are encountered or if there are signs of Leishmaniasis, then the sand fly bite requires professional medical treatment. As of 2006, there is no vaccine to combat Leishmaniasis caused by a sand flea bite.