A swimming pool rash is common among people that swim in chlorinated pools often. However, this skin rash problem may also occur when swimming in lakes, rivers, etc. or when relaxing in a hot tub or whirlpool. The swimming rash may also be known by other names such as hot tub rash, chlorine rash, or swimmer’s itch. These may or may not refer to the same type of skin rash problems.

The swimming pool rash may refer to the skin being exposed to excessive amounts of chlorine, which is a skin irritant. Chlorine is a necessary component in swimming pools and hot tubs in order to kill bacteria that can lead to skin and health problems. If the strength of the chlorine in the water is too strong or if repetitive exposure to chlorinated water occurs, a chlorine rash or chlorine itch may develop. This is a form of chemical dermatitis.

The best treatment or remedy is to stay away from chlorinated water for a while to let the skin recover from the chlorine exposure. Certain lotions can be applied to the skin prior to swimming to block the effects of chlorine on the skin. This is a useful procedure for those who need to be in swimming pools such as competitive swimmers. 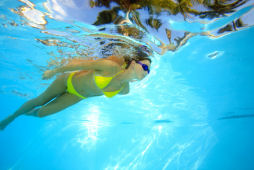 A swimming pool rash or skin infection is often caused by bacteria such as pseudomonas aeruginosa (PA). This bacterium is prevalent in hot tubs, spas, and whirlpools. Whirlpools, etc., often contain warm water, which causes disinfectants to break down, and bacteria to grow. Pseudomonas bacteria leads to an all-over body rash, which may include blisters and sometimes looks like chicken pox. The itchy skin rash generally appears 12 to 48 hours after exposure to the pseudomonas bacteria. The bacterium also targets the general health of individuals by causing eye, ear, nose, and throat irritations or infections. Urinary track infections are also possible.

The skin rash will generally disappear without treatment after 7 to 10 days, unless complications such as infections develop. Infections of the skin or other parts of the body need to be examined and treated by a physician.

The pool rash or more specifically swimmer’s itch, can also be caused by parasites from birds and mammals. This type of skin rash results from swimming in lakes, ponds, rivers, and oceans. The symptoms are similar to the skin rash caused by bacteria as described above.

To prevent a swimming pool rash on the skin, certain general rules need to be followed:

To prevent swimmer’s itch, avoid shallow marshy type swimming areas, especially when snails are seen. Snails carry the skin rash causing parasite that was released by birds or mammals. Shower or at least towel-dry the skin immediately after swimming. A shower should be taken after returning home.

Finally, general treatment options or remedies for swimming pool rash or skin rash symptoms include use of: over the counter corticosteroid creams, cool compresses, bathing in water with baking soda added, or use of various anti-itch lotions that are available without a prescription such as Aveeno or Calamine lotion.